Nationalité Cambodge
Naissance 1970 (51 ans)
Ampor Tevi (Khmer: អម្ពរ ទេវី; born 1970) is a Cambodian actress active in 1990s. Within the span of her career she has starred in numerous films, from movies to musical skits. Her career started in 1988 with her paired actor Sam Vityea. After Sam Vityea died that year, Ampor Tevi was often paired with fellow actor, also famous at the time, Tep Rindaro.

Ampor Tevi was born in 1970. She is the eldest child in the family among other 5 siblings. Her debut film was released in 1988 co-starring Sam Vityea, her ex co-star. She finished the 12th Grade at Bak Touk College of Fine Arts in 1989. She then got married to Pich Pirun who was also an actor from her generation in October,1992. 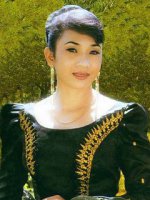 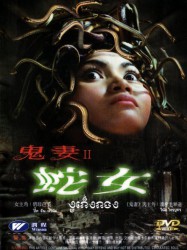 Neang Nhi (Ampor Tevi), a woman neglected by her abusive husband, Manop, is working in the fields one day when she accidentally loses her hoe in some shrubbery and encounters a giant python. The snake speaks to Nhi, and says he will return her hoe if she agrees to have sex with him. That night, the snake transforms into a man (Tep Rindaro), brings back the hoe, and has sex with Nhi, a union that results in Nhi's pregnancy.
Déjà vu ?
J'adore