The son of Sephardic Jewish parents—a Macedonian father and Turkish mother, both immigrants to Israel—he became an early inspiration of "solidarity and pride" for the Sephardic community.

Early life
Gaon was born in the Beit Hakerem section of Jerusalem in 1939. His father, Moshe-David Gaon, a well-known historian, was born in Sarajevo in 1889, and immigrated to British mandate Palestine, where members of his family had lived for five generations. He was a school master and Hebrew teacher in areas that included Jerusalem, Buenos Aires, and İzmir. He was also a poet and a scholar of Ladino. In Turkey, he met and married Sara Hakim, returning with her to Jerusalem.

Yehoram enlisted in the IDF in 1957. In the military, he joined the Nahal entertainment troupe, beginning a career in the performing arts that would eventually bring him fame as both a singer and actor.


Family
Gaon has two children from his former marriage to Orna Goldfarb: Moshe-David (named after his father) and Hila. His three brothers are Yigal, Kalila Armon, and late businessman and industrialist Benjamin "Benny" Gaon. Alice, a young street walker, receives an opportunity of a lifetime when a television crew casts her to star in a documentary about prostitution in Tel-Aviv.
Déjà vu ?
J'adore The plot follows that of the musical of the same name.
Déjà vu ?
J'adore 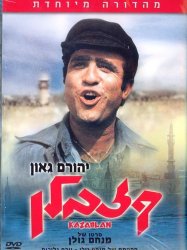 The story focuses on an American reporter who visits Israel with his girl friend. While there,