Zaw One was born Thaung Dan on 17 July 1945, in Mandalay, son of Mya Mya and "Taingchit" Thakin Thein Pe. He attended Taingchit High School in Mandalay. He received singing lessons from Bo Kin, founder of the Moe Kaythi Amateur Band, and later sang with the band. He then studied acting with Shumawa U Kyaw, a famous director. Zaw One made many films. His first role was in Chwe Ka Lay So So, directed by Shumawa U Kyaw. The film Say Lo Yar Say made him famous. He was particularly famous for the film Thingyan Moe. He also made a few albums as a singer.

He died on 12 August 2009, from liver disease in Yangon. He was survived by his wife Thant Shwe Zin Win, four children, and nine grandchildren. 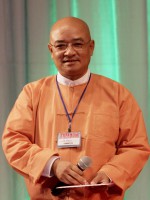