Naissance 1 janvier 1986 (34 ans) à Peterborough (Royaume-uni)
Nick Robinson is a British actor who has appeared regularly on British television, most famously as William Beech in Goodnight Mister Tom, starring John Thaw. He also played the lead in the television series Harry and the Wrinklies based upon the book of the same name by Alan Temperley, produced by Scottish Television. He has made a few other television programmes including an episode of Midsomer Murders and he was also in the film version of Tom's Midnight Garden. Other appearances include Ruth Rendell Mysteries, Urban Gothic and Down to Earth.

He began his career in theatre and, at the age of 7, appeared in the West End transfer of An Inspector Calls, produced by the National Theatre, at the Aldwych Theatre. His next appearance was in Theatre De Complicite's production of The Caucasian Chalk Circle in the Olivier Theatre and on its national tour. He later played the title role in the Royal Shakespeare Company's production of Little Eyolf, directed by Adrian Noble.

Nick Robinson was most famous for his role in Goodnight Mister Tom. This won the awards of the Bafta for the Most Popular TV programme in 1998 voted for by readers of the Radio Times, Best Drama performance in 1999 and the Best ITV/Channel 5 Programme of 1998.

Robinson also works extensively as a producer; most recently he presented the UK premiere production of Rodgers and Hammerstein's State Fair directed by Thom Southerland, at the Trafalgar Studios in London's West End. Other credits include The Full Monty at the New Players Theatre, Calamity Jane at Upstairs at the Gatehouse, Singin' in the Rain at the Broadway Studio, Call Me Madam at Upstairs at the Gatehouse and The Unsinkable Molly Brown at the Landor Theatre. Later this year, Robinson will be producing the Pulitzer prize-winning play The Diary of Anne Frank. 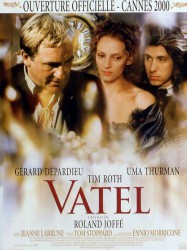 When Tom Long's brother Peter gets measles he is sent to stay with his Uncle Alan and Aunt Gwen in a flat with no garden. An elderly and reclusive landlady, Mrs Bartholomew, lives upstairs. Because he may be infectious he is not allowed out to play, and feels lonely. Without exercise he is less sleepy at night and when he hears the communal grandfather clock strangely strike 13, he investigates and finds the small back yard is now a large sunlit garden. Here he meets another lonely child called Hatty, who seems to be the only one who can see him. They have adventures which he gradually realises are taking place in the 19th century. Each night when Tom visits, Hatty is slightly older and Tom begins to wonder about the nature of time and reality. In an attempt to discover what's going on Tom asks Hattie to leave her skates in a hidden place. When he goes back into the future he manages to find them.
Déjà vu ?
J'adore In September 1939, the United Kingdom enters World War II and children are evacuated from London to the countryside for their safety. Tom Oakley, a lonely and bitter old man living in the countryside village of Little Weirwold, is forced to look after one of the evacuees, William "Willie" Beech. Tom has long since withdrawn from life after losing his wife and child to scarlet fever many years ago, while Willie is a quiet young boy who comes from an abusive home and is apprehensive of Tom.