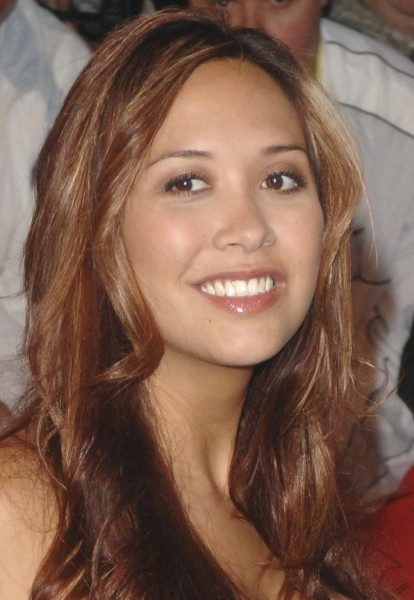 Nom de naissance Myleene Angela Klass
Nationalité Royaume-uni
Naissance 6 avril 1978 (44 ans)
Myleene Angela Klass (born 6 April 1978) is an English singer, pianist, media figure and model, best known as a member of the now defunct pop band Hear'Say. They released two studio albums and four singles, the first two of which reached number one on the UK singles chart. Klass independently released two solo classical crossover albums in 2003 and 2007.
More recently, Klass is better known as a television and radio presenter; she has hosted television shows including Popstar to Operastar (2010–2011) and BBQ Champ (2015–present) on ITV and The One Show (2007) on BBC One. She was briefly a regular panellist on the ITV lunchtime chat show Loose Women in 2014. In April 2012 her net worth was estimated at £11 million.

Klass lives in Cuffley, near Potters Bar, Hertfordshire. On 1 April 2007 she announced she was pregnant, with her first child due on 7 September. As a result, she delayed her wedding to Graham Quinn until 2008. Their daughter, Ava Bailey Quinn, was born on 16 August 2007 at 13.45 GMT weighing 5 lb 9 oz (2.5 kg) Klass's spokesman said: "Myleene presented The One Show and felt a bit weird on the way home. She went to the hospital to get checked out and they told her she was in labour".

Klass has published a book about her experiences of being pregnant, entitled My Bump and Me: From Morning Sickness to Motherhood – An Honest Diary of My Pregnancy. Klass gave birth to a second daughter Hero Harper, on 25 March 2011. On 21 October 2011, Klass and Quinn married, with 16 people in attendance. On 6 April 2012 (Klass's birthday), Quinn walked out of the marital home just six months after they married. On 23 April 2013, Myleene was granted a quickie divorce and the Decree Nisi was approved in 100 seconds.

In December 2005, Klass was attacked by a group of teenagers in a newsagent in Bermondsey. Klass had a bag of chips dropped on her head, and was pushed to the ground. The teenagers attempted to take photos of Klass on their mobile phones. On 1 May 2006, Klass was involved in a head-on go-karting crash at a Red Bull charity go-karting event in Cardiff, South Wales. In January 2010, Klass claimed she received a warning from Hertfordshire Police for brandishing a kitchen knife (through a window) at a group of teenagers who entered her garden while she and her daughter were alone in the house – she stated she was "utterly terrified" and "aghast" at the response by the police. Hertfordshire Police have denied making any such warning and stated that the law allows householders the proportionate use of force to protect themselves. It has subsequently been reported that it was Klass's agent or publicist who notified the police of the incident and who then passed on the story to the Sun Newspaper's reporter, Emma Cox.

Klass has been an amateur astronomer for most of her life, having been taught the basics by her father. She was one of a handful of celebrities, engineers and scientists who were at the UK National Space Centre control centre for the touch-down of the UK Mars probe Beagle 2 in the early morning of Christmas Day 2003. Since then she has been a keen supporter of the UK's work in the European space programme. In March 2006, Klass publicly criticised the proposed closure of the London Planetarium and explained on television how to view Venus in the early morning. She also appeared on Channel 4's Richard & Judy to discuss the book Moondust, which follows the lives of the first men on the moon, and in 2007 attended the televised party on BBC One, held at the home of Patrick Moore in Selsey to mark the 50th anniversary of Moore's monthly programme, The Sky at Night. Klass is now studying astronomy with the Open University.