Nationalité Coree du sud
Naissance 28 mai 1953 (67 ans) à préfecture métropolitaine de Tokyo (Japon)
Moon Sung-keun (born May 28, 1953) is a South Korean actor and politician. Moon was born in Tokyo, Japan, in 1953. His father was Rev. Moon Ik-hwan, who fought for democracy alongside Kim Dae-jung under the military regime led by Park Chung-hee in 1970s, and was a well-known pro-unification activist. After graduation from Sogang University with a bachelor's degree in trading, Moon worked as a salaryman for 8 years. In 1985, he began acting in theater, and became a key figure in the beginning of the renaissance of Daehangno stage plays in the mid-1980s, playing the leading role in such mega-hits as Chilsu and Mansu and Till the End of Time. Moon made his film debut in 1990 with Black Republic directed by Park Kwang-su. Moon started his political activities in 2009, becoming Democratic United Party's temporary chairman in 2012. The plot draws on No Gun Ri victims' experiences, but the characters are all fictional. The film opens with scenes establishing the ordinary domestic rhythms of a midcentury Korean village, with children at play, men relaxing over a board game, and a young teacher leading her pupils in practice for a singing contest. But the fighting front of the war, which began several weeks earlier, soon intrudes as combat moves south.
Déjà vu ?
J'adore 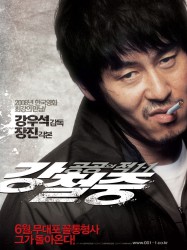 The North and South Korean governments are on the verge of reopening the Kyungui Railroad, which connects the two Koreas, as a further step toward reunification. Japan refuses to accept the decision, claiming rights to the railway lines based on official documents imprinted with the imperial seal of Emperor Gojong of Joseon a century ago. Yet an age old conspiracy is uncovered where the imperial seal with which Emperor Gojong signed the documents is suspected to be fake. It is a race against time and hidden agendas as the South Korean president (Ahn Sung-ki) employs the outspoken historian Choi Min-jae (Cho Jae-hyun) and the descendant of the Joseon royal bloodline Kim Yu-shik (Kang Shin-il) to find the authentic seal and prevent the history of Japanese occupation from repeating itself. In the meantime, Japanese economic sanctions divide the South Korean government, and its armed forces appear on the border of South Korea threatening its sovereignty. Eventually, the authentic royal seal is found and Japan apologizes for its occupation.
Déjà vu ?
J'adore