Nom de naissance Li Zhen
Naissance 10 avril 1990 (29 ans)
Li Xin’ai (born April 10, 1990), also known as Li Zhen, a Chinese singer, actress. She was born, raised in Xi’An, China, with a quarter of Russian origin. Without any acting experience before, she was chosen to be the female lead in Jay Chou’s second movie The Rooftop, which would release on July 11, 2013 in Mainland China. On May 27 2013, the press conference of the movie “The Rooftop” was held in Beijing, first time reveal the female lead for the movie, according to executive producer Will Liu, it was a coincidence to find Li, Xin’ai when he crossing the road and find the in the other side fitted to the female lead in the movie character setting. Li, Xin’Ai was found by the executive producer Will Liu coincidently when she crossing the street. Thus Li, Xin’Ai became a “Cinderella of the zebra crossing”.

Li Xin’ Ai said she would be an accountant if she didn’t meet Will Liu, the film executive producer of“The Rooftop ”. But now, she wants to concentrate herself on the film industry. And after the screening of “The Rooftop”, she started her new drama “Legend of Ban Shu”, a drama talked about a story of a female teacher in Han dynasty. Besides from her career, Li Xin’ Ai describes herself as an outgoing person, she like Anna Hathaway in Batman, because she said a girl like this was cool. Also, Li Xin’ Ai’s hobbies is watching comic books, go to gym and reading. 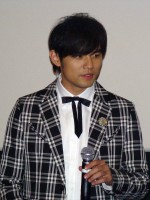 The story occurs in a fantasy world called Galilee City, that consists of two contrasting communities. One group lives on the Rooftop, where they dance and sing their days away with no worries. While those on the ground are affluent and possess more power.