Among his many television credits are appearances on shows such as Playhouse 90, Sugarfoot, Hawaiian Eye, Combat!, The Wild Wild West, Perry Mason, Daniel Boone, Gunsmoke, Frontier Circus, Get Smart, Hawaii Five-O, Hogan's Heroes, Mission: Impossible, Quincy, and Dallas. Wynant made ten guest appearances on Perry Mason, including three as Deputy District Attorney Sampson during the 1960-1961 season. In his first appearance on the show in 1958 he played defendant Daniel Conway in "The Case of the Daring Decoy." In 1963 he played murder victim Tobin Wade in "The Case of the Decadent Dean."

One of his more memorable appearances was in the Twilight Zone episode "The Howling Man".

In recent years, he has become a member of Larry Blamire's stock company, playing authoritative figures in several of Blamire's features and shorts, such as a Pentagon general in The Lost Skeleton Returns Again and a weird psychiatrist in Dark and Stormy Night.

He returned to the big screen in 2011's Footprints for which he was nominated Best Supporting Actor at the Method Fest Independent Film Festival. 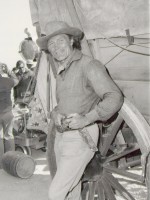 A woman (Sybil Temtchine) wakes up at sunrise on the footprints and handprints of Grauman's Chinese Theatre in Hollywood with no idea who she is or how she got there. Upon awakening, she wonders if she isn’t, in fact, lost in a dream.
Déjà vu ?
J'adore When a family of aliens is stranded in the Midwest after their spaceship crashes, a kind innkeeper takes them in. Their peace is threatened by a government agent who wants to assure that the aliens cannot intermingle with humankind.
Déjà vu ?
J'adore Gary and Bobby are two stock car drivers who grew up together and both love the same girl, Shelley. Fake newspaper articles by Georgina Clark start appearing highlighting a feud between them. At first Bobby and Gary ignore the reports but eventually the rivalry becomes genuine.
Déjà vu ?
J'adore