Enokaa Sathyangani Keerthinanda is an internationally acclaimed Sri Lankan film director and producer. In the year 2002, she received critical acclaim for her maiden effort Sulang Kirilli, which deals with the theme of abortion. The film bagged the highest number of awards won by a single film in the history of Sri Lanka's film industry. She is an active member of "Colombo Independents Cinema Forum" which works towards a "better and wholesome Srilankan cinema". After a highly productive maiden venture, she is regarded as one of the few successful female directors in Sri Lanka.

Early life
Keerthinanda had her early education at Sujatha Vidyalaya, before moving on to Visakha Vidyalaya, Colombo for her secondary studies.

With her inborn talent and creativity for artistic work, she won almost all of the house competitions in her young days. However, going in the footsteps of her father and brother, who are both lawyers, she too was selected for the Faculty of Law at the University of Colombo.

Not very enthusiastic about law, she dropped off in her final year of studies, to pursue a career in film-making.

A brief profile of the director

As a storyteller, Inoka has paid much attention to the plight of underprivileged and disadvantaged women. In a country where very few women enter the film and Television field and even fewer establish themselves at the level of director, Inoka has been a single yet strong voice on behalf of Sri Lankan women.

As a well-known Television professional in the new generation, Inoka's latest creative contribution comes in the medium of cinema. Her newest project was named 'Sulang Kirilli' (The Wind Bird) a 35/mm Coloure Film. She scripted and directed it under the National Film Development Fund of the National Film Corporation. In this project she is the only woman filmmaker among the first ten filmmakers who had been selected for the hundred percent loan scheme project, which was introduced in the year 2001, by the National Film Corporation of Sri Lanka. 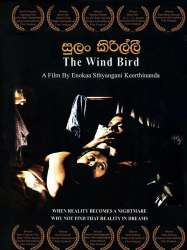