Nationalité Royaume-uni
Naissance 14 juin 1949 (72 ans) à Le Cap (Afrique du sud)
Récompenses Laurence Olivier Awards, Chevalier commandeur de l'ordre de l'Empire britannique
Sir Antony Sher, KBE (born 14 June 1949) is a British actor of South African origin, and twice winner of the Laurence Olivier Award. He joined the Royal Shakespeare Company in 1982 and toured in many roles, as well as appearing on film and TV, and working as a writer and theatre director. In 2001, he starred in his cousin Ronald Harwood’s play Mahler's Conversion, and said that the story of a composer sacrificing his faith for his career echoed his own identity struggles. Sher and his partner and collaborator Gregory Doran became one of the first gay couples to enter into a civil partnership in the UK.

In 2005, Sher and his partner – director Gregory Doran, with whom he frequently collaborates professionally – became one of the first gay couples to enter into a civil partnership in the UK. 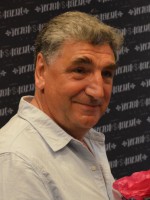 Over the course of three days, eight government aides and the Defence Secretary participate in a war-game which has taken place regularly among British civil servants since the 1960s, as a way to help them formulate government procedure in the event of nuclear war. In the depicted meetings, set in 2014, the group discusses possible UK policy in the fictional event of a nuclear detonation in Mumbai, India by a Pakistani organisation.
Déjà vu ?
J'adore