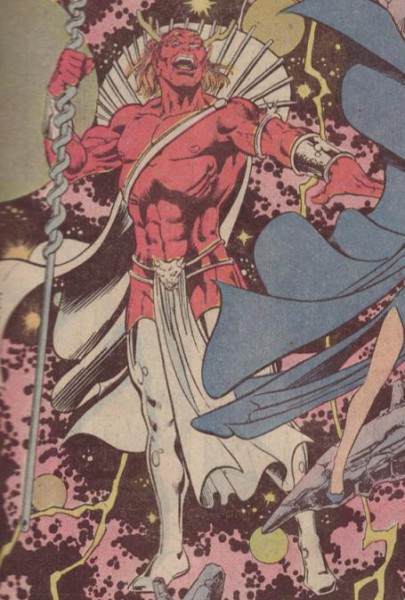 A sadistic, cruel and powerful demon of inter-dimensional origin, Trigon is a result of the mating between a female member of a mystic sect and the god they worshiped. A side effect of this pairing is that their child was filled with the cast-off evil energies of the inhabitants of Azarath, forming him into their personification. At birth, Trigon killed everyone around him (including his own mother). At the age of six, he destroyed an entire planet. And by the age of thirty, he held dominion over millions of worlds in his dimension.
There is some confusion regarding the origins of Trigon, as he claims to have existed as formless energy since the beginning of his own universe, while the energies cast off by Azar and Azarath simply allowed him to take physical form roughly a thousand years before DC's present day.

Arella was a depressed woman who decided to join a Satanic cult known as the Church of Blood that was trying to kill Trigon. When the ritual was performed, Trigon, disguised as a handsome male, emerged and married Arella. Soon impregnated by Trigon, Arella discovered Trigon's true nature. When Trigon leaves Arella, Arella is on the brink of suicide when she is found by an extra-dimensional cult and is brought to Azarath, where she gives birth to their daughter Raven. Raven is brought up to "control her emotions" in order to suppress and control the demonic powers she inherited from Trigon. During this time, Trigon was aware of his daughter's whereabouts, but rarely intervened except when a renegade monk of the cult attempted to cast Raven as an infant into another dimension to avert her potential threat; Trigon struck him down at the moment of the deed and allowed the cult to keep her safe at present.

Raven learned of Trigon's intentions to conquer the Earth and vowed to stop him; she initially approached the Justice League, but they refused her on the advice of Zatanna who sensed her demonic parentage. In desperation, she reformed the Teen Titans with several new members in order to fight her father. The team was eventually able to defeat Trigon and seal him in an interdimensional prison. However, Raven still had to fight her father's influence as he was not completely destroyed. Trigon eventually escaped and came to Earth, taking control of Raven and destroying Azarath in the process. The Titans came together and tried to fight Trigon, but were contaminated by his demonic influence and killed Raven; this allowed the souls of Azarath to possess her and use her as a channel to kill Trigon—the demonic possession had been part of a plan to defeat Trigon, as the Titans would never have killed Raven on their own—blasting him out of existence with a beam of purifying light. Although Trigon is gone, his followers (led by Brother Blood) have tried to revive him several times.

In Titans vol. 2, #1, Raven states that Trigon has returned and is responsible for the recent attacks on past and present members of the Teen Titans. The cause of his resurrection from the dead has not been revealed. It is revealed in issue #3 that attacks by rival demons have spread Trigon's forces too thinly and left him desperately weak, which forces him to renew his attack on our dimension in hopes of creating a new power base.
Jacob, Jared and Jesse, three of Trigon's sons, turn up in Titans #4. They have the key part in his return to life. Issue #3 also reveals that these new children have the ability to induce the seven deadly sins in any living being; the children in #3 induce wrath (Jared), lust (Jacob) and envy (Jesse). In Titans #4, they attempt to open the portal to Trigon's realm, but betray their father and steal what little power Trigon had left (an action that Trigon is actually proud of). The trio leave, thinking they have gained great power, and Trigon is left trapped in his realm. The three return a short time later, in Titans #5, corrupting their half-sister and turning her to their side. However, they are defeated by Raven and the Titans.


The New 52
Trigon makes his post-Flashpoint debut in issue one of the Phantom Stranger, as a part of the Third Wave of The New 52 (a reboot of the DC Comics universe). In this incarnation, Trigon has an extra set of eyes, giving him six in total. He has struck a bargain with the Stranger to return his offspring Raven/Rachael Roth to him, in turn to spare Earth from his armies that were ready to search the Earth for her, having already destroyed Azerath years ago. In The New 52 it has been revealed that Trigon has at least four children, where Raven is the youngest, her older brothers are named Belial, Ruskoff and Suge. With Belial being the oldest and most civilized, according to himself, of the three brothers.

Later, Trigon returns to Earth, feeling confident in having swayed Raven to his side during their time together in the Under-Realms where time flows differently. It has been revealed that Trigon is the ruler of six kingdoms known as the Under-Realms, a collective title for the planets and dimensions under his rule and that he has grown bored with them. At first he ruled through his own power, then through conquest on the battlefield and finally through subterfuge. His ultimate goal is to unite all seven realms under the rule of Raven, who he believes will mold them all in her own image, something only she can do as she has the capacity to love, something Trigon cannot.

As part of DC Villains month, Trigon will replace the Teen Titans as main character in their book for one issue named #23.1 with Deathstroke taking over #23.2. The Teen Titans book will then resume publishing after Villains Month has concluded. Though unconfirmed, the Villains Month event, leaves Trigons origins in question. Long ago, in another universe, a trinity of beings called the Divine attempted to eradicate the concept of evil through an item known as the Heart of Darkness. When the Divine return to a world they believed liberated, they find it in utter chaos along with the being they believe to be responsible, only because he appears not to be one of the planets inhabitants. As they had done billions of times before, they sentence him and his two guards to the Heart of Darkness, that would feed on their evils. However, they were horrified when the stranger not only resisted, but consumed the Heart of Darkness, along with the evils of a billion worlds, which heralded the true birth of Trigon. Now driven by insatiable hunger for evil, Trigon now moves slowly from universe to universe, spreading his devastating brand of evil in order to sate a hunger that knows no end.

Much later, Trigon encounters a woman wearing a suit of armor specifically crafted to counter his immense powers. Though neither is able to slay the other, Trigon is forced to retreat, swearing that a members of his blood would return in their thousands to destroy the wearer of the Silent Armor. Trigon has since set his plans into action, only to run into the problem of most of the mothers of his children being unable to endure it, leaving Trigon with only three sons, all of whom he considers failures. Then, one day, he is brought a human from Earth known as Arella, who gives him his first daughter; Raven, the most powerful of Trigons children, and the reason why Trigon now targets Earth for conquest. 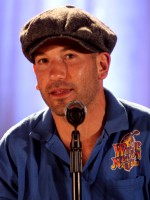 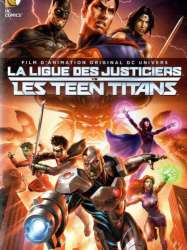