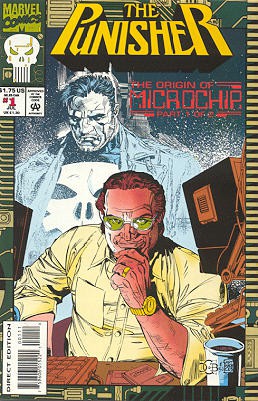 Tweeter
David Linus "Microchip" Lieberman (often known as Micro) is a fictional character appearing in American comic books published by Marvel Comics. Created by writer Mike Baron and artist Klaus Janson, he first appeared in The Punisher #4 (Nov. 1987) as an ally of The Punisher for many years. He assisted the Punisher by building weapons, supplying technology and providing friendship, though in more recent publications, Microchip gradually evolved from the Punisher's friend to a bitter villain.

David Linus "Microchip" Lieberman was a legendary computer hacker in the early days of the hacking business, performing numerous scams and hacks still held in awe today, until one scam brought him too close to real-world criminals forcing him to go into "retirement" as a quiet unassuming businessman. This ended when his nephew, attempting to follow in his favorite uncle's footsteps, was caught and killed after accidentally hacking into the private computers of Wilson Fisk (a.k.a., The Kingpin). While personally investigating his nephew's murder, Lieberman met and started collaborating with The Punisher. Microchip's help proved invaluable to Castle; he served not just as a hacker and cyber-investigator. Micro also helped Castle: manage and launder his finances (i.e., the money Castle takes from the criminals he kills); set-up and equip Castle's safehouses; train Castle in more "specialized" skills for his war on crime; and, obtain hard-to-get ammunition and equipment. Less obsessed with Castle's personal war, Microchip acts as a de facto counseler to Castle (e.g., encouraging Castle to take occasional vacations and breaks, to avoid burn-out or losing his mind).

Over time more of his past history is revealed. His father had been forced to create weapons against his will well before Microchip was born; in the same issue he mentions his sister is a happy housewife in Ft. Lauderdale. Micro has an illegitimate son named Louis Frohike. Louis is killed while trying to assist Frank Castle in a hostage exchange.

Micro is capable of fighting on his own, such as when he took on an assassination ring threatening his godson's family. He also takes on less violent crime. When he discovers his new neighbor is being scammed by a 'charity' he destroys it from within, not by violence but by computer trickery, sending a recording of the administrator's plans to fans of yodeling music.

Despite everything, he has always considered his weight a problem. At one point he signs himself into a 'fat camp', though it goes unexpectedly as it turns out the administrators are dealing speed.

Micro loses his left pinky finger when the Kingpin sends it to Frank as part of a blackmail attempt. He is let free from the Kingpin's custody when the arranged deal (Frank slaying a rival gangster) is accomplished.


The Punisher War Zone
The Punisher's 1992 spin-off entitled The Punisher War Zone was launched, written by Chuck Dixon and penciled by John Romita, Jr.. The first issues included character arcs for Micro, where Linus goes so far as to see a psychiatrist and take up acting in theatre as part of his therapy. After Castle discovers this, the two have a disagreement and Micro goes into hiding, working as a barman.

Microchip develops a friendship with Mickey Fondozzi, a Mafia soldier whom Frank recruits to his side. The two work on operations together, such as infiltrating the Secret Empire, a multi-faceted criminal organization.

After the Punisher's seeming death in attacking a criminal meet-up, Microchip and Mickey find themselves literally on the street, their escape vehicle surrounded by police. When Microchip refuses to destroy the vehicle, as it would kill innocent cops, Mickey abandons him.


Death
Ultimately, Castle and Micro have one final fallout just before the cancellation of all three major Punisher titles in 1995. This fight comes to an end in the closing issues of The Punisher War Journal. Micro disagrees with Castle's methods, feeling that Castle has lost sight of their original goals and has gone over the edge. Soon after, Micro then tries to replace Castle with a new handpicked "Punisher", former Navy Seal Carlos Cruz. Micro and Castle come face to face in one of Micro's safehouses in what appears to be a final confrontation. A gun battle ensues between the two former partners. This battle is interrupted by rogue S.H.I.E.L.D. agent Derek "Stone Cold" Smalls, who had been part of a program to take down vigilante groups and had himself gone vigilante. Smalls fires a rocket into the safe house, killing Microchip. Castle moves on, unsure if he would have really slain Microchip himself.


Dark Reign
During the Dark Reign storyline, Hood brings Microchip back from the dead and offers to bring his son back to life if he helps in dealing with the Punisher. Microchip sends Megatak to attack Punisher's hacker ally Henry. To start off Hood's revival ritual of Castle's and Microchip's family, Microchip shoots G.W. Bridge in the head. Unfortunately the Punisher refuses to help and threatens to use Firebrand to burn them alive. The death of Bridge does reanimate the corpses. The Punisher, believing that his family is not actually present, forces Firebrand to destroy the bodies, then kills the villain. 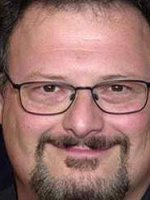