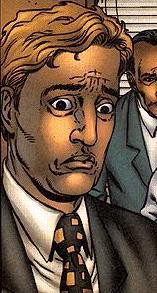 Tweeter
Lieutenant Martin Soap is a fictional police officer, and ally of the Marvel Comics antihero the Punisher. He was created by Garth Ennis and Steve Dillon, and first appeared in The Punisher Vol. 5, #2 (May 2000).

Moments after his birth, Soap was dropped on his head by a nurse. He was then abandoned at an orphanage in Dunmore, New Jersey, where he remained from 1971 to 1987. Soap was bullied by the staff and the other children, and during one unsuccessful attempt at running away he was inspired to become a police officer by the alcoholic detective who brought him back to the orphanage. Soap rose through the ranks of the NYPD to become a detective himself, despite all of his cases being botched by an improbable turn of events, such as a judge being declared insane, or an entire jury taking ecstasy.

When the Punisher resurfaces and declares war on the Gnucci crime family, Soap is assigned to the Punisher Task Force, a sinecure with only one other member, a neurotic behavioral psychologist named Buddy Plugg. After Soap criticizes his profile of the Punisher, the distraught Plugg hangs himself in his and Soap's shared office.

Soap is later approached by Molly von Richthofen, a lieutenant, and the sole member of another pointless task force, one supposedly dedicated to dismantling the Gnucci family. The two join forces, and stake out Ma Gnucci's mansion, intending to step in and arrest whoever remains after the Punisher inevitably lays siege to the building. Over the course of their investigation, Soap and Molly become friends, and remain so even after Molly shoots down Soap's attempt to pursue a romantic relationship with her by revealing that she is a lesbian. After killing Ma Gnucci and destroying her mansion, the Punisher confronts Soap and Molly, and offers them Ma's compromising photographs of the mayor and the police commissioner in exchange for all of the information that the NYPD has pertaining to the Vigilante Squad. With the photographs, Soap is able to blackmail his way into becoming the new commissioner; while Soap is basking in his good fortune, a bird defecates on his head.

Soap is demoted back to detective and once again assigned to the Punisher Task Force after pictures of him soliciting a prostitute surface. The dismayed Soap attempts suicide, but is stopped by the Punisher, who convinces Soap to become his informant within the NYPD. After Soap kills serial killer John "Bubba" Prong in self-defense, Soap is promoted to Lieutenant.

Soap is later taken hostage by hired goons working for ruthless tabloid reporter Chuck Self, who forces the Punisher to take Self along with him while the Punisher spends a night killing gangsters and petty criminals. If Castle fails to comply with Self's orders, Self will text-message his men to kill Soap. During the course of being chased by gang members and Mafiosos, Self is injured several times while the Punisher himself remained unscathed. Self is later killed by accidentally falling into a wood chipper, and Castle returns to save Soap by killing Self's thugs. The Punisher leaves Self's mangled corpse on the hood of his own car, then Castle and Soap walk away.

Soap is seen as a bar regular, falsely believing the bar owner, Kevin, to be one of his true friends. Soap meets up with a succession of inappropriate romantic targets, including, but not limited to, a transvestite and a woman implied to be his own long-lost mother. Kevin is aware of the twisted nature of Soap's romantic conquests yet chooses not to inform him for his own amusement. When Soap nearly kills himself with a gun in the men's bathroom, Kevin intervenes and Soap believes that it's out of concern for his well being. But when Kevin makes a snarky comment because he didn't want a mess and preferred Soap to kill himself at his home, Soap snaps at Kevin, threatens him with his gun and terrifies him before storming off, having found self-confidence in himself. Soap tries to arrest the Punisher, but fails to stop him. Soap then becomes despondent; Castle then tells Soap when things aren't getting better, to "just go". 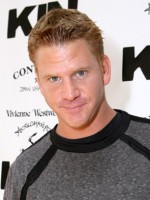