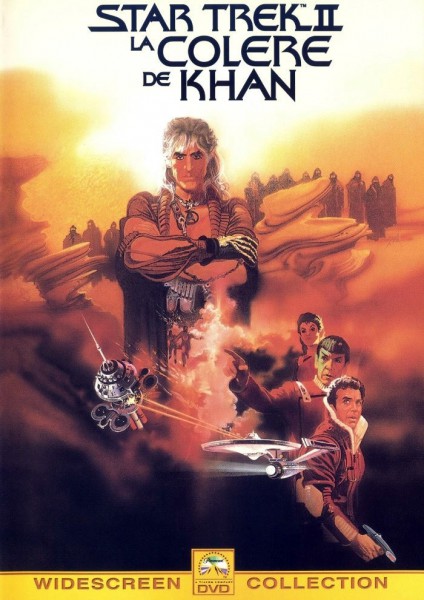 Partager la citation sur facebook [eulogizing Spock] We are assembled here today to pay final respects to our honored dead. And yet it should be noted, in the midst of our sorrow, this death takes place in the shadow of new life, the sunrise of a new world; a world that our beloved comrade gave his life to protect and nourish. He did not feel this sacrifice a vain or empty one, and we will not debate his profound wisdom at these proceedings. Of my friend, I can only say this: of all the souls I have encountered in my travels, his was the most... [voice breaks] human.

Partager la citation sur facebook [Captain Terrell tries to convince Khan's followers]
Khan: Captain, Captain... Save your strength, Captain. These people have sworn to live and die at my command 200 years before you were born. Do you mean he never told you the tale? To amuse your Captain, no? Never told you how the Enterprise picked up the Botany Bay, lost in space from the year 1996 with myself and the ship's company in cryogenic freeze?
Capt. Terrell: I never even met Admiral Kirk.
Khan: 'Admiral?' 'Admiral!' 'Admiral'... Never told you how Admiral Kirk sent 70 of us into exile in this barren sandheap with only the contents of these cargo bays to sustain us?
Chekov: You lie! On Ceti Alpha Five there was life! A fair chance...
Khan: [shouts] THIS IS CETI ALPHA FIVE! [walks back to Chekov and calms voice] Ceti Alpha Six exploded six months after we were left here. The shock shifted the orbit of this planet and everything was laid waste. Admiral Kirk never bothered to check on our progress. It was only the fact of my genetically-engineered intellect that allowed us to survive. On Earth, 200 years ago, I was a prince with power over millions...
Chekov: Captain Kirk was your host. You repaid his hospitality by trying to steal his ship and murder him!

Partager la citation sur facebook [after Reliant's prefix code has been received]
Spock: The prefix number for Reliant is one-six-three-zero-nine.
Lt. Saavik: I don't understand.
James T. Kirk: You have to learn why things work on a starship. Each starship has a prefix command code to prevent an enemy from doing what we're attempting. Using our console to order Reliant to lower her shields.
Spock: Assuming he hasn't changed the combination. He's quite intelligent.

Partager la citation sur facebook [Kirk has just seen Capt Terrell commit suicide and Chekov collapse in agony]
James T. Kirk: Khan, you bloodsucker. You're going to have to do your own dirty work now! Do you hear me? Do you?
Khan Noonien Singh: Kirk? You're still alive, my old friend?
Kirk: Still, "old friend!" You've managed to kill everyone else, but like a poor marksman, you keep missing the target!
Khan: Perhaps I no longer need to try, Admiral.
Kirk: Khan. Khan, you've got Genesis. But you don't have me! You were going to kill me, Khan. You're going to have to come down here. You're going to have to come down here.
Khan: I've done far worse than kill you. I've hurt you. And I wish to go on... hurting you. I shall leave you as you left me, as you left her. Marooned for all eternity, in the center of a dead planet... buried alive. Buried alive.
Kirk: KHHHHAAAAAAAAN!

Partager la citation sur facebook Lt Saavik: [to Kirk] On the test, sir. Will you tell me what you did? I would really like to know.
Dr Leonard McCoy: Lieutenant, you are looking at the only Starfleet cadet who ever beat the "No-Win" scenario.
Saavik: How?
James Kirk: I reprogrammed the simulation so that it was possible to save the ship.
Saavik: What?!
David: He cheated.
Kirk: Changed the conditions of the test. Got a commendation for original thinking. I don't like to lose.
Saavik: Then you've never faced that situation; faced death.
Kirk: I don't believe in the "No-Win" scenario. [pulls out his communicator] Kirk to Spock, it's two hours. Are you ready?
Spock: [on communicator] Right on schedule, Admiral. Just give us your co-ordinates and we'll beam you aboard.
Kirk: All right! [to Saavik] I don't like to lose. [bites an apple]
Saavik: [back at Enterprise] I don't understand. We were immobilized. Captain Spock said it would be two days.
Kirk: Come, come, Lieutenant. You of all people go by the book.
McCoy: I'm takin' this bunch to sickbay.
Saavik: By the book?
Kirk: By the book - Regulation 46A: "If transmissions are being monitored during battle..."
Saavik: "...no uncoded messages on an open channel." [astonished and looking at Spock] You lied.
Spock: I exaggerated.
Kirk: Hours instead of days. Now we have minutes instead of hours.

Partager la citation sur facebook Joachim: We're all with you, sir. But, consider this. We are free. We have a ship, and the means to go where we will. We have escaped permanent exile on Ceti Alpha V. You have defeated the plans of Admiral Kirk. You do not need to defeat him again.
Khan Noonien Singh: He tasks me! He tasks me, and I shall have him! I'll chase him round the Moons of Nibia, and round the Antares Maelstrom, and round Perdition's flames before I give him up! Prepare to alter course!

Partager la citation sur facebook [Kirk hails Khan]
James Kirk: This is Admiral Kirk. We tried it once your way, Khan, are you game for a rematch? Khan, I'm laughing at the "superior intellect."
Khan Noonien Singh: Full impulse power!
Joachim: No, sir! You have Genesis! You can have whatever...
Khan: [grabs Joachim in anger] FULL POWER! [shoves him aside] DAMN YOU!

Partager la citation sur facebook Lenoard McCoy: Are you out of your Vulcan mind? No human can tolerate the radiation that's in there!
Spock: As you are so fond of observing, Doctor, I am not human!

Partager la citation sur facebook David: Lieutenant Saavik was right: You never have faced death.
Kirk: No. Not like this. I haven't faced death. I've cheated death. I've tricked my way out of death and patted myself on the back for my ingenuity. I know nothing.
David: You knew enough to tell Saavik that how we face death is at least as important as how we face life.
Kirk: Just words.
David: But good words. That's where ideas begin. Maybe you should listen to them. I was wrong about you. And I'm sorry.
Kirk: Is that what you came here to say?
David: Mainly. And also that I'm proud - very proud - to be your son.