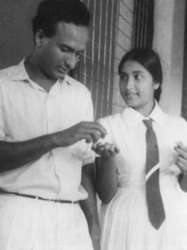 Damayanthi Kariyawasam (Dhammi) (Anula Karunathilake) is a mischievous school girl. Sugath Weerasekara (Wickrema Bogoda) is a shy and introverted boy who is new to Dhammi's school. He is quiet and gifted at schoolwork. Dhammi is immediately attracted to him and they become friends. The friendship eventually develops into a special relationship.
Déjà vu ?
J'adore

King Kasyapa (Leigh Lawson) is the son of King Dhatusena (Geoffrey Russell). Kasyapa murdered his father by walling him alive and then usurping the throne which rightfully belonged to his brother Mogallana (Ravindra Randeniya), Dhatusena's son by the true queen. Mogallana fled to India to escape being assassinated by Kasyapa but vowed revenge. In India he raised an army with the intention of returning and retaking the throne of Sri Lanka which was rightfully his. Knowing the inevitable return of Mogallana, Kasyapa is said to have built his palace on the summit of Sigiriya as a fortress and pleasure palace.
Résultats 1 à 10 sur 21
123Page suivante >