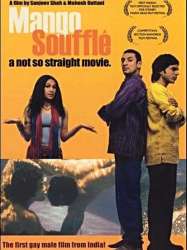 This movie begins when a gay fashion designer Kamlesh (Ankul Vikal) recovering from his recently ended relationship calls some of his friends over for dinner to make a special announcement about his personal life. But then Kamlesh's sisters (Rinke Khanna) enters the party with her fiancé (Atul Kulkarni), a man with a secret.
Déjà vu ?
J'adore 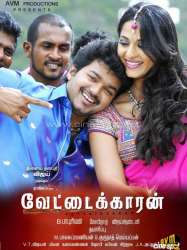 Ravi (Vijay) lives in Tuticorin. He aspires to become a policeman like his role model, Encounter Specialist Devaraj IPS (Srihari). After completing his Plus 2, he joins a college in Chennai and also earns a living by driving an auto rickshaw. During the course, he meets Suseela (Anushka Shetty) and falls in love with her instantly. Although Suseela rejects Ravi's advances at first, with the help of her grandmother (Sukumari), Ravi succeeds in winning Suseela's heart.
Déjà vu ?
J'adore 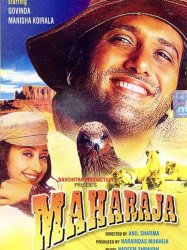 Fearing his death, Ranbir Singh (Salim Ghouse) decides to kill Kohinoor when he is a child, in vain though. After 20 years Kohinoor (Govinda) returns to claim his rightful place in the kingdom. He has developed advanced powers over matter and animals, which he uses to his advance to free his nanny, Ameenabi (Aruna Irani) who is being held by Ranbir and his associates. Kohinoor must pass numerous tests, including being exploited by a television reporter, Shaili Mathur (Manisha Koirala), who claims that she loves him; and fight hungry, blinded, man-eating lions.
Déjà vu ?
J'adore 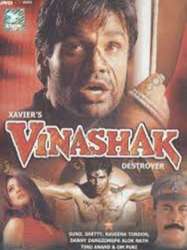 Police Inspector Arjun Singh (Sunil Shetty) is a brave and honest police inspector stationed in Khandala. He uses harsh ways against all the criminals. He is a very strict Police Officer. His colleague and friend is Inspector Khan (Om Puri) who always supports him. Arjun is in love with Kaajal (Raveena Tandon) who is the daughter of a senior police officer, A.C.P. Amar Agnihotri. Arjun's own father does not agree with the harsh ways he uses against the criminals. Arjun is always supported by his sister.
Déjà vu ?
J'adore

The film starts with an underworld don named Jai "Jimmy" (Sunil Shetty), who is spreading terror in a bar until a young man comes out and fights Jimmy. The two continue to fight until they hug each other and the man is Jimmy's childhood friend, Sameer Deshmukh (Gautam Rode), who returns to the city after a long time after completing his education from the Navy. At that time, they run into two police officers, whom Sameer shot them down before escaping.
Déjà vu ?
J'adore 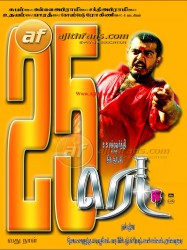 Ajith is Red (it stands for Revolution, Education, Development), an orphan who has since grown up to be the local don in Madurai. Naturally he possesses a heart of gold and when not bashing up bad guys, he spends his time forcing schools to accept students without donations and taking care of orphans. Cheeni (Salim Ghouse) is his biggest enemy. Red falls for Gayatri (Priya Gill), the daughter of his friend and confidante Narayanan (Manivannan) and helps her without her knowledge. She too likes him but wants him to give up his life of violence. Meanwhile, a reporter (Rajesh) for Ananda Vikatan begins to serialise Red's story under the name Aadi and it becomes quite the rage among readers.
Déjà vu ?
J'adore 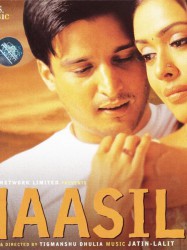 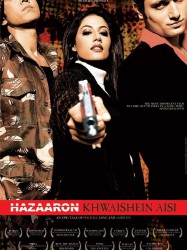 The film opens at Hindu College in Delhi with the story of three students, Siddharth Tyabji (Kay Kay Menon), Geeta Rao (Chitrangada Singh) and Vikram Malhotra (Shiney Ahuja). Siddharth is a driven revolutionary who dreams of bringing a revolution in the state of Bihar that will end the caste-based discrimination there; bring social justice, and, change the society for the better. Geeta is a London returned, South Indian girl in love with the firebrand Siddharth. She has led a very sheltered life thus far, and is yet to explore the terrain of the Indian socio-political landscape. While she finds Siddharth's Naxalite rhetoric attractive, she is not sure if she can whole-heartedly subscribe to it. And every time they come to point of choice, Siddharth chooses his ideology over his love for her thus breaking her heart time and again. Vikram is a middle-class boy who dreams of making it big, whatever the cost. He is particularly afflicted by his father's Gandhian ideas, but irritated and frustrated at the same time, seeing his father's way of life as ineffective in bringing about a change.
Déjà vu ?
J'adore 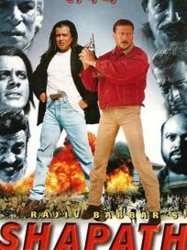 Shapath is an Action flick from Rajiv Babbar, who has produced several successful films with Mithun. The film had Jackie Shroff in an important role. The film also has Singer Altaf Raja in Special appearance.
Résultats 1 à 10 sur 70
123457Page suivante >