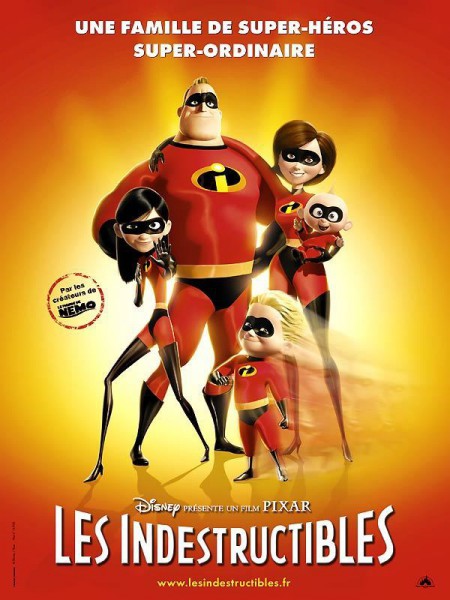 Partager la citation sur facebook Of course I have a secret identity. [about her super-suit] Can you see me in this at the supermarket? Come on! Who'd wanna go shopping as Elastigirl? You know what I mean?

Partager la citation sur facebook Where is my Super Suit?

Partager la citation sur facebook [After a huge explosion destroys the Parrs' house] Does this mean we have to move again?

Partager la citation sur facebook I knew you couldn't do it, even when you've got nothing to lose. You're weak. And I've outgrown you.

Partager la citation sur facebook [Mr. Incredible is about to go to the scene of a tour bus robbery when Buddy enters the car]
Buddy: Cool! Ready for take-off!
Bob: What the-- who are you?
Buddy: Well, I'm IncrediBoy!
Bob: What? No. You're that kid from the fan club. Brophy-Br-Brody-Bu-Buddy! Buddy.
Buddy: My name is IncrediBoy.
Bob: Look, I've been nice, I've stood for photos, signed every scrap of paper you pushed at me, but this? This isn't funny.
Buddy: You don't have to worry about training me. I know all your moves, your crime-fighting style, favorite catch phrases, And everything! I am your number #1 fan!
[Bob ejects him from his car and drives away]

Partager la citation sur facebook Bob: I work alone.
Helen: And I think you need to be more... [goes through rapid series of stretch-power maneuvers] flexible.
Bob: Uh, are you doing anything later?
Helen: I have a previous engagement.

Partager la citation sur facebook [Bob confronts a French, mime-like, clown-like super villain named Bomb Voyage]
Bob: Bomb Voyage.
Voyage: Monsieur Incroyable...! [Mr. Incredible...!]
Buddy: [offscreen] And IncrediBoy!
[he breaks through the window.]
Voyage: IncrediBoy?
Buddy: [flies up to Bob using rocket boots] Hey! Hey! Aren't you curious on how I get around so fast? [shows Bob his rocket boots] See? I have these rocket boots. And they--
Bob: Go home, Buddy.
Buddy: What?
Bob: Now.
Voyage: Petit naïf libe...! [Little oaf...!]
[Buddy looks at Voyage]
Buddy: Can we talk? [pulls Bob off to the side] You always, say, "Be true to yourself.", but you never say which part of yourself to be true to! Well I've finally figured out who I am! [walks up to Mr. Incredible] I am your ward: IncrediBoy!
Bob: And now, you have officially gone too far, Buddy. [grabs Voyage before he can escape]
Buddy: This is because I don't have powers, isn't it? Well, not every superhero has powers, y'know! You can be super without them! I invented these. [points to his rocket boots] I can fly! Can you fly?
Bob: Fly home, Buddy. I work alone.
Voyage: Et ton costume est complètement ridicule! [And your outfit is totally ridiculous!]
Buddy: Could you just gimme one chance? Look, I'll show you! I'll go get the police!
[Voyage has attached a bomb to Buddy's cape; Bob notices]
Bob: Buddy, don't!
Buddy: It'll only take a second! Really!
Bob: No! Stop! [releases Voyage] There's a bomb! [grabs onto Buddy's cape]

Partager la citation sur facebook Bob: [hands Buddy to the police] Take this one home. And make sure his mom knows what he's been doing.
Buddy: I can help you! You're making a mistake! [arrested and shoved into the police car] Hey!
Bob: [to the cops] The injured jumper. You sent paramedics?
Cop: Already picked him up.
Bob: The blast in that building was caused by Bomb Voyage, who I caught in the act of robbing the vault. Now we might be able to nab him if we set up a perimeter.
Cop: You mean he got away?
Bob: Well, yeah. [gestures to Buddy in the car] Skippy here made sure of that.
Buddy: IncrediBoy!
Bob: You're not affiliated with me!

Partager la citation sur facebook [as the cops burst into the jewelry store where Bob and Lucius are, Lucius reaches for a water cooler to replenish his freezing powers]
Cop: Freeze!
Lucius: I'm thirsty.
(Lucius reaches for a cup of water)
Cop: I said "freeze"!
Lucius: I'm just getting a drink. [takes the cup and drinks]
Cop: Okay, you had your drink. Now, I want you to...
Lucius: I know, I know. Freeze. [freezes the cop]

Partager la citation sur facebook [Edna shows Helen the other suits she has created for the Parrs]
Edna: I started with the baby.
Helen: Started?
Edna: Shh! Darling! Shh! I cut it a little roomy for the free movement. The fabric is comfortable for sensitive skin [flamethrowers throw fire at the suit without leaving burn marks], and it can also withstand a temperature of over 1,000 degrees! Completely bulletproof. [machine guns train on the suit and empty rounds into it without causing any damage] And machine-washable, darling. That's a new feature.
Helen: What on earth do you think the baby will be doing?!
Edna: Well, I'm sure I don't know, darling. Luck favors the prepared. I didn't know the baby's powers, so I covered the basics.
Helen: Jack-Jack doesn't have any powers.
Edna: No? He'll look fabulous anyway. [moves on to Dash's suit] Your boy's suit I designed to withstand enormous friction without heating up or wearing out. A useful feature. [moves on to Violet's] Your daughter's suit was tricky, but I finally created a sturdy material that will disappear completely as she does. [moves on to Helen's new suit] Your suit can stretch as far as you can, without injuring yourself [the suit gets stretched], and still retain its shape. Virtually indestructible. [two missiles fire at the suit, but the suit sustains no damage] Yet it breathes like Egyptian cotton. As an extra feature, each suit contains a homing device, giving you the precise global location of the wearer at the touch of a button. [hands Helen one showing the tracking location of one of the suits] Well, darling? What do you think?
Helen: What do I think?! Bob is retired! I'm retired, our family is underground! You helped my husband resume secret hero-work behind my back?!
Edna: Well, I assumed you knew, darling! Why would he keep secrets from you?
Helen: He wouldn't. Didn't-- D-Doesn't.
Edna: [sighs] Men at Robert's age are often unstable. Prone to weakness.

Partager la citation sur facebook Helen: There's plenty of leftovers you can reheat, make sure Dash does his homework, and both of you get to bed on time. I should be back tonight, late. You can be in charge that long, can't you?
Violet: Yeah, but why am I in charge, again?
Helen: Nothing. Just a little trouble with Daddy.
Violet: You mean Dad's in trouble, or Dad is the trouble?
Helen: I mean he's either in trouble, or he's going to be.

Partager la citation sur facebook Violet: [about to a supersuit that Dash grabbed from Helen] What makes you think it's special?
Dash: I don't know, but why'd Mom try to hide it?

Partager la citation sur facebook Dash: Are we there yet?
Bob: We'll get there when we get there!

Partager la citation sur facebook Helen: Great. Now our kids are in danger?! I was afraid this would happen.
Bob: Well, if you suspected danger, why'd you bring them?
Helen: I didn't bring them! They stowed away! And I don't think you're striking the proper tone here!