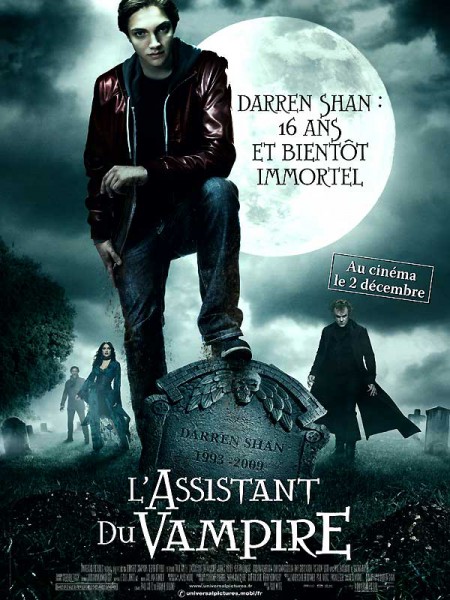 Partager la citation sur facebook [Introducing himself at the show] Thank you ladies and gentlemen. I am so excited to be here in an anonymous small town that used to have character but is now just a bland suburb filled with chain stores and surrounded by slum. [Awkward silence in the audience] It really is a pleasure to be here. And I am SO honoured that bla bla bla and so on and so forth and excetera adnosium.

Partager la citation sur facebook Now boys, vampires don't exist, but if one did, and he thought someone knew, he might smother them in their sleep.

Partager la citation sur facebook [After Darren enters his room and turns on the light] Nice room. Some excellent reading material you have here. Thought this was on the internet now.

Partager la citation sur facebook Larten Crepsley: Now, are you mentally unfit? Didn't you hear me threaten you at the show?
Steve: I did. It was awesome. You see, I want this. I want you to make me into a vampire. Vampires- they don't take crap from anybody. They live by their own set of rules.
Larten Crepsley: It's true; they do have their own rules. We wrote some of them.
Gavner Purl: And one of those rules is: "Children can't become vampires."
Steve: Look- blood! [Holds out a small cut on his hand]
Larten Crepsley: [Wide-eyed] Blood! You see Gavner! Blood... [Crepsley drops the act and gives Steve a deadpan expression.] Look. If you become a vampire, you have to leave your friends, and your family; it's deeply depressing. Trust me. Now get out of here!
[Steve is silent for a few moments]
Steve: I haven't seen my dad in years. My mom's drunk all the time. I absolutely hate my life! I've never actually said it before, but it's the truth. This is what I was meant for.
Larten Crepsley: What you were meant for? Well, if that's the case, let's test your blood.
Gavner Purl: Larten...
[Crepsley tastes some of Steve's blood, but immediately spits it back out.]
Larten Crepsley: Who sent you here? Your blood tastes of evil. You can never be a vampire.
Steve: [In disbelief, then anger] What, I have... bad blood? I'm never gonna forget this. One day, I promise you, I will hunt you down-
Larten Crepsley: And what? Kill me? You know how easily I could kill you. I could do it tonight. I could knock you out, and lay you in front of a bus, and no one would ever know!
Gavner Purl: Calm down; save that stuff for the enemy! He's just an idiot kid! [Quietly, looking at Steve] Who should be leaving, right now, while he still can.
[Steve turns and leaves; the instant he is out Gavner kicks the door shut.]

Partager la citation sur facebook [Steve is standing on the roof of his high school, contemplating suicide. Looking down, he slips and stumbles back.]
Mr. Tiny: Careful. The first step is a big one. Oh, I know. You miss- the one known as Darren. You feel betrayed, abandoned- you're a loyal friend. [Pauses] Unlike him.
Steve: Darren was a loyal friend.
Mr. Tiny: Oh, really? What if I told you he's still alive? He's taken your place, stealing your dreams! Oh, I know. You dream of killing people, drinking their blood! You dream of leading a great, bloodthirsty army!
Steve: Who the hell are you?
Mr. Tiny: I'm Mr. Tiny.
Steve: Are you a vampire?
Mr. Tiny: Oh, I'm not a vampire. I'm not a vampeneze. I'm... an aficionado. I want to see a marvelous war!
Steve: What do you want from me, you freak?
Mr. Tiny: [Visibly annoyed] Oh, I'm not a freak. I despise freaks! Can a freak travel back and forth between life and death? I think not. Can a freak create new life from rotting flesh and souls? Please! Can a freak bring about the Apocalypse, and rule the world? No. Sadly neither can I. [Looks pointedly at Steve] Not without help.

Partager la citation sur facebook Darren: Look, I didn't mean to hurt anybody.
Steve: Who cares what you meant to do? What you did was take my place. That was my dream.
Darren: Steve, what are you doin' with him?
Steve': Who? Murlaugh? Come on, man, he's not as bad as he looks. For one thing, he didn't say I had bad blood, like Crepsley. And for another thing, they didn't lie to me. And you know what? They think I'm awesome! They say I have a destiny, or whatever. Look at you. Who wants to be a vampire anyways? Vampires suck. Vampeneze rule!
Murlaugh: [Looking at Mrs. Shan] Juicy!
Steve: First guy I killed, Mr. Kersey. Blood, just gets me goin', you know what I mean?
Darren: I wouldn't know, I haven't been drinking any.
Steve: I know you; always trying to look Mr. Goody Two-Shoes, all the time. I bet you'll resist drinking blood, and resist drinking it, and resist drinking it. And then at the last second, you'll become this total bloodhound! All right, man, here's the deal. See, the fact guy, he still wants you on the team. And despite everything else, you are still my best friend. So I tell you what, I'll make you a deal that might just save your ass. If you kill your family, I'll let the freak go. [Laughs] Wait, my bad, that's backwards. If you kill the freak, I'll let your family live.
Murlaugh: What? Let the juicy one go?
Steve: Hey. Look, man, it's part of the plan. Talk to Mr. Tiny. [Turns back to Darren] So whaddya say? Oh, you gotta drink her blood, too. [Holds out a switchblade] You can do her in with this.

Partager la citation sur facebook Larten Crepsley: You want to stay alive? You haven't been drinking blood yet; I doubt you'd be much good in a fight.
Darren Shan: Well, what if they hurt someone?
Larten Crepsley: People can look out for themselves.
Darren Shan: You've been looking out for me. Why?
Larten Crepsley: Why? Because I'm an idiot, that's why. Only an idiot would spit in the eye of Mr. Tiny. Because he doesn't just kill people; he brings them back, as well. And when I finally die, I plan on staying dead. Life might be meaningless, but death I still have hope for.
Darren Shan: Life isn't meaningless.
Larten Crepsley: Tell me that after two hundred years of it, kid.