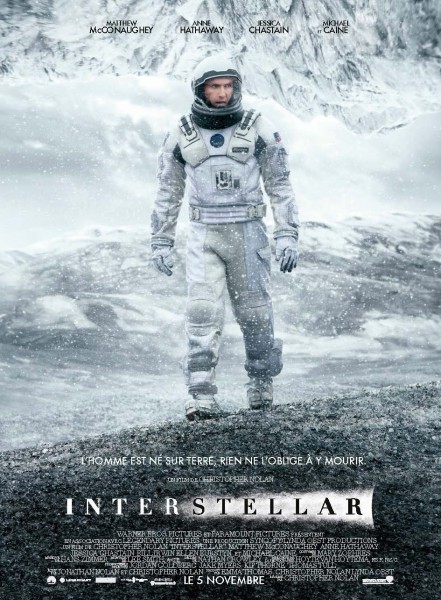 Partager la citation sur facebook Today is my birthday. And it's a special one because you once told me that when you came back, we might be the same age. Well, now I'm the same age that you were when you left... and it'd be really great if you came back soon.

Partager la citation sur facebook You might have to decide between seeing your children again and the future of the human race.

Partager la citation sur facebook TARS talks plenty for both of us...

Partager la citation sur facebook Cooper, this is no time for caution.

Partager la citation sur facebook Doyle: The lost communications came through.
Brand: How?
Doyle: The relay on this side cached them. Years of basic data, no real surprises. Miller's site has kept pinging thumbs up, as has Mann... but Edmunds went down three years ago.
Brand: Transmitter failure?
Doyle: Maybe. He was sending thumbs up right till it went dark.
Romilly: Miller still looks good? [Doyle nods, and Romilly begins drawing on a whiteboard] She's coming up fast ... with one complication: the planet is much closer to Gargantua than we thought.
Cooper: Gargantua?
Doyle: A very large black hole. Miller's and Dr. Mann's planets orbit it.
Brand: And Miller's is right on the horizon?
Romilly: A basketball on the hoop. Landing there takes us dangerously close. A black hole that big has a huge gravitational pull.
Cooper: Look, I can swing around that neutron star and decelerate—
Brand: It's not that, it's time. That gravity will slow our clock compared to Earth. Drastically.
Cooper: How bad?
Romilly: Every hour we spend down there will be maybe... seven years back on Earth.
Cooper: Jesus...
Romilly: That's relativity, folks.

Partager la citation sur facebook Cooper: Ready?
CASE: Yup.
Cooper: Don't say much, do you?
CASE: TARS talks plenty for both of us.

Partager la citation sur facebook Cooper: We wanna get down fast, don't we?
Brand: Actually we want to get there in one piece.
Cooper: Hang on.

Partager la citation sur facebook The end of Earth will not be the end of us.

Partager la citation sur facebook Mankind's next step will be our greatest.

Partager la citation sur facebook The Times' Kenneth Turan gave a glowing review, writing that "though it's a big studio blockbuster with all the traditional plot elements the term implies, 'Interstellar' turns out to be the rarest beast in the Hollywood jungle. It's a mass audience picture that's intelligent as well as epic, with a sophisticated script that's as interested in emotional moments as immersive visuals. Which is saying a lot."

Partager la citation sur facebook The New York Times' A.O. Scott wrote, "It may be enough to say that 'Interstellar' is a terrifically entertaining science-fiction movie, giving fresh life to scenes and situations we've seen a hundred times before, and occasionally stumbling over pompous dialogue or overly portentous music."

Partager la citation sur facebook USA Today's Claudia Puig was more measured in her appraisal, writing, "While it reaches for the stars, director Christopher Nolan's 'Interstellar ' is a flawed masterpiece. The story is ever-ambitious, sometimes riveting and thought-provoking, but also plodding and hokey and not as visionary as its cutting-edge special effects. And at nearly three hours, the film would have benefited from more judicious editing."

Partager la citation sur facebook The Associated Press' Jake Coyle said that at its heart, "Interstellar" is "a father-daughter tale grandly spun across a cosmic tapestry. He continued: "There is turbulence along the way. 'Interstellar' is overly explanatory about its physics, its dialogue can be clunky and you may want to send composer Hans Zimmer's relentless organ into deep space. But if you take these for blips rather than black holes, the majesty of 'Interstellar' is something to behold."

Partager la citation sur facebook For the Washington Post's Ann Hornaday, the film didn't quite come together. She said that "there are moments of genuine awe and majesty in 'Interstellar,' but there are just as many passages that play as if Nolan is less interested in value for the viewers than proving a point, whether about the arcana of quantum physics, his technical prowess or the enduring power of love."
McConaughey makes for "a compelling, even believable hero," she continued, but "too often, the father-daughter dynamics that propel 'Interstellar' ... feel shrewdly calculated, the emotionalism ginned up to a hysterically maudlin pitch." Ultimately, the film "tries so hard to be so many things that it winds up shrinking into itself, much like one of the collapsed stars [McConaughey's character] hurtles past on his way to new worlds."

Partager la citation sur facebook I think really space exploration, to me, has always represented the most hopeful and optimistic endeavor that mankind has ever really engaged with. I was certainly struck when they flew the space shuttle in, the 747 when it came to the science center here in LA, were up in Griffith Park with hundreds of people waving flags and watching this thing fly down and it was a very moving moment actually, and a little melancholy at the same time, because what we felt was that sense of that great endeavor, that great collective endeavor, the hope and optimism of that is something it feels like we’re in need of again. I feel very strongly that we’re at a point now where we need to start looking out again and exploring our place in the universe more.

Partager la citation sur facebook I had the advantage of coming to the project late, being able to look at what these guys had done, and a lot of my contribution was stripping things down, because they put in all these incredible mind-blowing ideas but I felt that it was more than I could absorb as an audience member. So I spent a lot of time in my work on the script kind of choosing what I thought were the most emotive, the most tactile of these ideas, things I could really grab a hold of. Then I found working with Kip to be very liberating because it wasn’t so much restraint of “well, science says you can’t do this”, it was more an exploration of ideas with him of “OK, what’s plausible? We could go here, we could go there.” I found it very exciting to work with him on that.

Partager la citation sur facebook The state-of-the-art sci-fi landscapes are deployed in service of Hallmark card homilies about how people should live, and what’s really important. ("We love people who have died—what's the social utility in that?" "Accident is the first step in evolution.") After a certain point it sinks in, or should sink in, that Nolan and his co-screenwriter, brother Jonathan Nolan, aren’t trying to one-up the spectacular rationalism of “2001." The movie's science fiction trappings are just a wrapping for a spiritual/emotional dream about basic human desires (for home, for family, for continuity of bloodline and culture), as well as for a horror film of sorts—one that treats the star voyagers’ and their earthbound loved ones’ separation as spectacular metaphors for what happens when the people we value are taken from us by death, illness, or unbridgeable distance. (“Pray you never learn just how good it can be to see another face,” another astronaut says, after years alone in an interstellar wilderness.)
While "Interstellar" never entirely commits to the idea of a non-rational, uncanny world, it nevertheless has a mystical strain, one that's unusually pronounced for a director whose storytelling has the right-brained sensibility of an engineer, logician, or accountant. There's a ghost in this film, writing out messages to the living in dust. Characters strain to interpret distant radio messages as if they were ancient texts written in a dead language, and stare through red-rimmed eyes at video messages sent years ago, by people on the other side of the cosmos. "Interstellar" features a family haunted by the memory of a dead mother and then an absent father; a woman haunted by the memory of a missing father, and another woman who's separated from her own dad (and mentor), and driven to reunite with a lover separated from her by so many millions of miles that he might as well be dead.