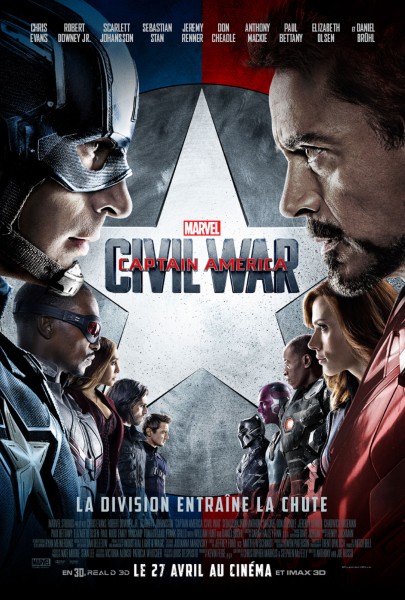 Partager la citation sur facebook [letter to Stark] Tony, I'm glad you're back at the compound. I don't like the idea of you rattling around a mansion by yourself. We all need family. The Avengers are yours. Maybe more so than mine. I've been on my own since I was 18. I never really fit in anywhere, even in the army. My faith's in people, I guess. Individuals. And I'm happy to say that, for the most part, they haven't let me down. Which is why I can't let them down either. Locks can be replaced, but maybe they shouldn't. I know I hurt you, Tony. I guess I thought by not telling you about your parents I was sparing you, but I can see now that I was really sparing myself, and I'm sorry. Hopefully one day you can understand. I wish we agreed on the Accords, I really do. I know you're doing what you believe in, and that's all any of us can do. That's all any of us should. So no matter what, I promise you, if you need us…if you need me…I'll be there.

Partager la citation sur facebook [after his tech demo at MIT showing a younger version of himself and the last time he saw his parents] Binarily augmented retro-framing, or "B.A.R.F."–God, I gotta work on that acronym. An extremely costly method of hijacking the hippocampus to clear…traumatic memories. It doesn't change the fact that they never made it to the airport, or all the things I did to avoid processing my grief. Plus, six hundred and eleven million dollars for my little therapeutic experiment? No one in their right mind would've ever funded it.

Partager la citation sur facebook [eulogy for Peggy Carter] Margaret Carter was known to most as the founder of SHIELD, but I just know her as Aunt Peggy. She had a photograph in her office: Aunt Peggy standing next to JFK. As a kid that was pretty cool, but it was a lot to live up to, which is why I never told anyone we were related. I asked her once how she managed to master diplomacy and espionage at a time when no one wanted to see a woman succeed at either. And she said, "Compromise where you can. Where you can't, don't. Even if everyone is telling you that something wrong is something right. Even if the whole world is telling you to move, it is your duty to plant yourself like a tree, look them in the eye, and say, 'No, you move'."

Partager la citation sur facebook An empire toppled by its enemies can rise again. But one which crumbles from within? That's dead. Forever.

Partager la citation sur facebook [after the Bucharest fight, in the back of a paddy wagon]
Sam Wilson: So...you like cats?
Steve Rogers: Sam!
Wilson: What? Dude shows up dressed like a cat and you don't wanna know more?
Steve: [to T'Challa] Your suit. It's vibranium?
T'Challa: The Black Panther has been the protector of Wakanda for generations. A mantle passed from warrior to warrior. And now, because your friend murdered my father, I also wear the mantle of king. So I ask you, as both warrior and king…how long do you think you can keep your friend safe from me?

Partager la citation sur facebook [after seeing the video of the Winter Soldier killing Howard and Maria Stark]
Tony Stark: Did you know?
Steve Rogers: I, I didn't know it was him—
Tony: Don't bullshit me, Rogers, did you know?
Steve: [heartbroken] Yes.

Partager la citation sur facebook Iron Man: Stay down. Final warning.
Captain America: [casually referencing that one time outside a movie theater in the 40's] I can do this all day.

Partager la citation sur facebook [as Cap and Iron Man duke it out over Bucky, T'Challa confronts Zemo]
T'Challa: I almost killed the wrong man.
Helmut Zemo: [scoffs] Hardly an innocent one.
T'Challa: Is this all you wanted? To see them rip each other apart?
Zemo: My father lived outside the city, and I thought we would be safe there. My son was excited. He could see the Iron Man from the car window. I told my wife, "Don't worry. They're fighting in the city. We're miles from harm." When the dust cleared, and the screaming stopped... It took me two days until I found their bodies. My father still holding my wife and son in his arms. And the Avengers? They went home. I knew I couldn't kill them. More powerful men than me have tried. But if I could get them to kill each other? [beat] I'm sorry about your father. He seemed a good man. With a dutiful son.
T'Challa: Vengeance has consumed you. It's consuming them. I am done letting it consume me. Justice will come soon enough.
Zemo: Tell that to the dead. [cocks a gun and puts it under his chin, but T'Challa catches him in time and restrains him easily]
T'Challa: The living are not done with you yet.

Partager la citation sur facebook [Everett Ross welcomes Zemo to the Raft]
Everett Ross: [to the imprisoned Zemo] Meals at eight and five, toilet privileges twice a day. Raise your voice? Zap. Touch the glass? Zap. You step out of line, you deal with me. Please, step out of line. [grins] So how does it feel? To spend all that time, all that effort, and to see it fail so spectacularly?
Helmut Zemo: Did it? [Ross's smile falters]

Partager la citation sur facebook [post-credits scene: after Bucky goes into hibernation, Steve and T'Challa look out over Wakanda]
Steve Rogers: You know if they find out he's here, they'll come for him.
T'Challa: Let them try.

Partager la citation sur facebook Whose side are you on?