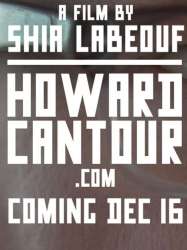 The film opens with Howard Cantour (Jim Gaffigan) reflecting on being a critic and how a review can either promote or devastate a film's chances of survival. The movie then cuts to a scene of Howard sitting in a restaurant with Dakota (Portia Doubleday), a young review critic. Howard is dismissive of her, saying that he wouldn't have bothered talking to her if she wasn't attractive. The two discuss an upcoming film preview and Dakota states that she believes that the two of them should help the movie out as the film's production company is not going to heavily promote it. Howard states that he hopes that the film fails, as he has grown jaded with how directors overall deal with reality in a film. He goes on to argue that he grew disgusted with the film's director, Holly Pondyoke (Dito Montiel), as he had filmed a scene in a previous film where a kid stole his mother's ring, which Howard believes was done only to show how horrible people can be.