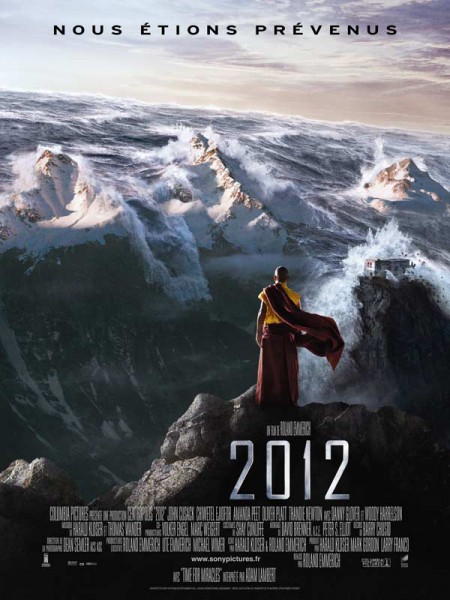 Partager la citation sur facebook [reacting to Kate after she reiterates the California Governor's statement that everything is safe] When they tell you not to panic... that's when you run!

Partager la citation sur facebook [as Los Angeles goes through a 10.9 earthquake; he rushes into his wife's house and it's about to collapse] GET IN THE FUCKING CAR!

Partager la citation sur facebook [making his address to the nation] My fellow Americans. This will be the last time I will address you. As you know, catastrophe has struck our nation, has struck the world. I wish I could tell you we could prevent the coming destruction. We cannot. Today, none of us are strangers. Today, we are one family, stepping into the darkness together. We are a nation of many religions, but I believe these words reflect the spirit of all our faiths. "The Lord is my Shepherd, I shall -" [signal cut]

Partager la citation sur facebook [broadcasting live as the Yellowstone Caldera is about to erupt] This marks the last day of the United States of America. And, by tomorrow, all of mankind. And we will be visible from the Milky Way as a tiny little puff of smoke. I'm watching the earth crumble before my eyes. The giant ash cloud created by this super-volcano will first envelop Vegas and then St. Louis and then Chicago and then, at long last, Washington, D.C. will have its lights go out! [sees Yellowstone Caldera explode] I have goose bumps, people! [slightly thrown back by shockwave] I wish you could see what I'm seeing people! I wish you could be here with me! Oh baby... bring it on! Always remember folks: [spreads out arms] you heard it first from Charlie!!!! [is hit by a massive rock and killed]

Partager la citation sur facebook Carl Anheuser: [about Laura Wilson] She's a smart girl, she'll understand.
Adrian Helmsley: That thing in Paris, we're not involved in any of that, are we?
Anheuser: "We"? Who's "we", what are you talking about? What we need to do is focus on the timeline.
Helmsley: So when do we let the country know?
Anheuser: What?
Helmsley: The people, sir. They need to know.
Anheuser: Well, of course they do. Listen, your job is to figure out when this is all gonna fall apart, my mission is to figure out how to retain some semblance of government after it falls apart, and until then, we don't have time for anything except for doing those jobs, okay? Now, you call me the moment you get any news from Yellowstone.
Helmsley: Yes, sir. [turns to go]
Anheuser: Cute girl, eh?
Helmsley: Sir?
Anheuser: The First Daughter. I saw you looking at her.
Helmsley: I wasn't looking at her.
Anheuser: Better move fast, kid. The end is near.

Partager la citation sur facebook [Adrian Helmsley defies Anheuser to make his case to the other Arks taking in the people still stranded outside]
Adrian Helmsley: Ladies and gentlemen, this is Dr. Adrian Helmsley, chief science adviser to the late President Wilson.
German Chancellor: Could you please turn up the volume, Mr. Hoffmann?
Helmsley: I know we've all been forced to make difficult decisions to save our human civilization, but to be human means to care for each other and civilization means to work together to create a better life. If that's true, then there's nothing human and nothing civilized about what we're doing here.
Carl Anheuser: Dr. Helmsley's passion is admirable, but I will remind you that we have very limited resources and extremely limited time.
Helmsley: Ask yourselves, can we really stand by and watch these people die? I read a quote two days ago. The author is probably dead by now, but he said: "The moment we stop fighting for each other, [glares at Anheuser] that's the moment that we lose our humanity."
Anheuser: And in order to save the human race, we have an obligation to stick to this plan, which every nation on this flotilla has signed up for.
Helmsley: We have to let these people in-
Anheuser: They're in God's hands now!!! [to comms officer] Officer, you turn that off. That is an order sailor. Turn it off!
Professor West: [aims cane] Don't you dare touch that button, young man!
Anheuser: Have you completely lost your mind? Look at the clock! [points to countdown] We have barely 15 minutes left. Do you wanna be responsible for the extinction of the human race? Can you handle that, Adrian?
Helmsley: There's a young astrophysicist from India who's the reason we're all here.
Anheuser: Oh, for God's sake.
Helmsley: He's the one who discovered it all. He connected all the dots. We all owe him our lives. I just learned that he was killed with his family in a tsunami in eastern India. [gets more emotional] He was my friend, and he died in vain. Everybody out there has died in vain if we start our future with an act of cruelty. What would you tell your children? What will they tell theirs?
Laura Wilson: If my father were here, he would open the gates.
Russian President: The people of Russia [looks to fellow heads of state] along with China and Japan, agree... to open the gates.
German Chancellor: The United Kingdom, Spain, France, Canada, Germany and I believe I may also speak for the Italian prime minister, we vote to let these people come in.
Helmsley: Captain Michaels. Please.
Capt. Michaels: [contemplates, then reaches for radio mike] This is the captain. In a few moments, we will open the gates and get you people in. Please step back and clear the platform. [crowd cheers]

Partager la citation sur facebook The End Is Near.

Partager la citation sur facebook Who Will Be Left Behind?

Partager la citation sur facebook How would the governments of our planet prepare for the end of the world... They wouldn't.